In December, 2009, Indiana Representative Dan Burton sent a letter, signed by 40 Congressional members, to Army Major General Charles Cleveland, the convening authority who convened the courts-martial, asking him to drop the charges against the SEAL trio. Rep. Duncan Hunter of California, himself a former Marine with tours in Iraq and Afghanistan, also sent a letter signed by 33 members of Congress.

Major General Cleveland responded to Burton’s letter, saying the Congressman’s perception of the situation was based on inaccurate and faulty media reports. (We suppose that problem could be solved if Cleveland or someone in the command would release more information concerning this case.) He said the more troubling allegations are that the sailors tried to cover up the alleged incident and attempted to influence a witness.

On December 16, 2009, Texas Congressman Rep. Jim Poe (and 45 co-sponsors) introduced H.R. 977, a resolution in the House of Representatives "Honoring Navy SEALs Petty Officer 2nd Class Matthew McCabe, Petty Officer 2nd Class Jonathan Keefe, and Petty Officer 1st Class Julio Huertas for their heroic actions in the capture of Ahmed Hashim Abed, the mastermind behind of one of the most notorious crimes against Americans in Iraq." The bill has been referred to the House Committee on Armed Services.

So, while SOCOM is prosecuting these sailors for alleged "misconduct" following his capture, there is a resolution pending in Congress honoring them for their "heroic actions" in capturing this barbarian!

There is so much here that simply doesn't make sense. We can only surmise it must be because we are unable to get any details about what allegedly happened. And apparently, there are details that we may never know.

First, it is confounding, to say the least, that there is even a necessity for a "Warrior Defense Fund" to provide for the cost of legal defense for our warriors doing their jobs! The demoralizing effect of this type of prosecution on the morale of the troops who are currently fighting and training, and on our ability to recruit new enlistees, cannot be understated. It has been reported that our warriors are tired of looking over their shoulders. Is it any wonder?

The cost per man of the highly specialized training the SEALs undergo has been estimated at half a million dollars per man. Here we have three fine young men, who clearly execute their jobs well (they captured the guy without a single shot being fired), and we're going to throw away their careers as well as $1.5 million in training because some most-wanted terrorist claims he was punched in the gut?

So now we have to try to recruit 3 guys who even want to take their place in this political climate, spend another $1.5 million to train them, and if they enlist today, it'll still take years for them to complete their training. Meanwhile, the terrorists laugh at the gullibility of the politically correct Americans.

When will this government realize that the terrorists are using their own rules against them, and rectify the situation?

For the moment, let's even leave aside the comparison of the atrocity this man is allegedly responsible for and the relatively minor "assault" that has been charged. From a strict legal standpoint, it's irrelevant. We realize that from a grass-roots perspective, it seems ridiculous that someone would be court-martialed for punching a guy who committed such atrocities, but from a legal standpoint, it really doesn't matter.

Let's just think about this whole situation for a minute, shall we? Exercise a little common sense, which is in woefully short supply these days.

These three guys captured Abed without a single shot being fired, and brought him in for detention. If they wanted to beat him up, surely they could easily have done it "in the process of capturing him," and there likely would have been no questions.

Does it make sense that they would wait till several hours later, when he was already in custody, and then take a swing at him? Or that if they did, they would only punch him once, in the gut? C'mon, these guys are SEALs, the Navy's commandos. If they were going to risk their careers to beat him up, surely they'd do a better job of it?! And don't you find it interesting that the alleged "injury" is one for which there is no telltale mark, no "evidence" that such abuse occurred? Remember, the offense was initially reported by a MAA assigned to guard Abed. But did he see it, or did he just repeat a complaint made by Abed? We don't know.

I realize these comments may sound strange coming from a former prosecutor. They even surprise me. And it could be that when the evidence is known, it all makes sense, and we agree that this was the proper thing to do. But right now, with the dearth of information available to the general public, we have to wonder what this command is thinking and why they would put these brave men through these trials.

If the alleged "assault" even happened at all, could we blame these (or any other) sailors for thinking maybe their best bet was to "cover it up?" Maybe they heard about the nightmare suffered for the past four years by Marine Lt. Col. Jeffrey Chessani, the most senior of the so-called "Haditha Marines," whose prosecution for "failing to report and investigate the incident" was continued by the Marine Corps for years, even in the face of evidence that he in fact reported the incident up his chain of command immediately, and that his chain of command, up to and including the commanding general, agreed no further investigation was necessary. When the military judge threw out the charges due to unlawful command influence, the Marine Corps still continued its prosecution of Chessani, sending him to a Board of Inquiry, which could have recommended he be retired one paygrade lower if it found misconduct.

Chessani was "lucky" to escape with his retirement intact, but an outstanding Marine and effective warrior was forced to retire to appease a loud-mouthed, ignorant politician. Maybe these SEALs were hoping to avoid having their careers dragged through the mud, or ended unceremoniously by some commander feeling the pinch of political correctness.

We know that Congressman John Murtha was the political force behind the Haditha prosecutions. Who is behind this one?

Is Being Politically Correct
This Country’s Achilles’ Heel? 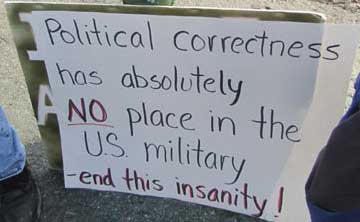 This hand-lettered sign, at the SEALs' arraignment in December, pretty much sums it up. The obsession of some with "political correctness" at the expense of everything else is a cancer eating away at the fabric of this country.

I have long said that political correctness is highly overrated. As the old saying goes, "You can't please all of the people all of the time." And some people just take pleasure in "being offended." It gives meaning to their lives, and gives them something to do. They just wouldn't be happy if they didn't have something to complain about.

Can't you just imagine what John Wayne would have to say about this whole situation?

How Can You Help?

In a word (OK, two words), get involved!

[Since these prosecutions have ended, we have removed the contact information, as it is no longer needed.]

Although this prosecution has ended, it appears there will be an ongoing need for a warrior defense fund to defend our brave men and women in uniform from unjust prosecutions for political expediency. Therefore, we are leaving this link live in case you would like to help support our warriors in this manner.

Our thanks to Bubba of WhatBubbaKnows.net, and his pals Russ and Randy, for permission to publish their photos of McCabe and Mrs. Zovko, and the "politically correct" sign in this article. Thanks also to Jeff Preston, who created (and copyrighted) the "Mother Avenged" poster specifically to benefit the legal defense fund for the three SEALs. It can be used ONLY to solicit contributions for the SEALs' defense.

What Are Your Thoughts
About the SEAL Trio?

Sound off! Share your thoughts about the prosecution of these three Navy SEALs and the political correctness that is crippling our military, and/or post messages of support for Petty Officers McCabe, Keefe, and Huertas.

Since you are writing a web page, please have more to say than just a one-liner.

Legal Stuff: By submitting comments to this site, I am granting Military-Money-Matters.com exclusive permission to publish my comments on this web site, and in any other medium, identified as a submission to this site.

Here's What Other Readers Had to Say

The links below will take you to the submissions from other readers ...

Matthew McCabe Not Guilty; SEALs Vindicated
Navy SEAL Matthew McCabe, a Second Class Petty Officer (E-5), was found not guilty of all charges by a seven-member panel of military members (the military …

Save the SEALs!
We must save the SEALs! This makes me sick to think this country could even think these well-trained SEALs could be in the wrong. This should not have …

SEALs Prosecution is Appalling
Debbie Lee writes: I am appalled and disgusted at the charges against our SEALs for having given a HVT (High Value Target) "a fat lip." I have heard …

First of SEAL Trio Acquitted in Baghdad
U.S. Navy SEAL, Petty Officer 1st Class Julio Huertas was found not guilty of dereliction of duty and impeding an investigation today by a six-man Navy …

SEAL Prosecution Unbelievable!
In my opinion, the actions taken by these "leaders" against these three SEALs will lead to special ops personnel of all branches being hesitant in the …

SEAL Prosecution is Ridiculous
Butch wrote: It is pretty ridiculous that charges went up thru the chain of command in the case of the three SEALs who captured this high-value target …

These SEALS are HEROES
Russ writes: These men are heroes in every sense of the word. They did their job and did it professionally and efficiently. Whether or not this godless …

If you didn't find what you were looking for, please enter your search terms here to search the site: