On September 11, 2001, Chairman of the Joint Chiefs of Staff, Navy Admiral Mike Mullen, was on the fourth floor of the Pentagon when terrorist hijackers flew an American Airlines 757 into the side of the building. On that morning, our world changed forever.

Mullen remembers the morning of September 11 being "spectacularly clear." He says, "I remember it literally as if it were yesterday, as I'm sure all Americans do." 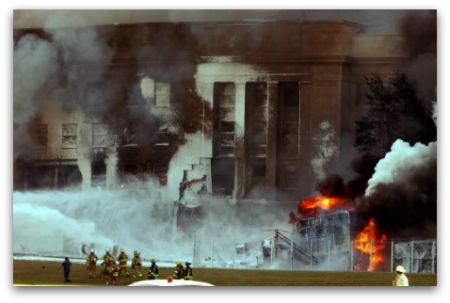 As hijackers flew other airliners into the Twin Towers of the World Trade Center in New York City that morning, Mullen was sitting in the Pentagon office of Chief of Naval Operations Admiral Vern Clark.

After the second plane hit the Twin Towers, Admiral Clark phoned the then-Chairman of the Joint Chiefs, Army General Hugh Shelton, to ask what we were doing, since it appeared we were under attack. The Chairman said he had been notified that a plane was also headed for Washington.

A few minutes later, Mullen felt the impact. The California native described it as feeling like an earthquake. American Airlines Flight 77 had just crashed into the side of the Pentagon. Mullen said that in his office, which was 50 yards away, his aides "looked out the window and saw a 757 fly in under their feet."

The Chairman's memory of September 11, 2001, is the chaos at the Pentagon, and the need to find out what was happening. Were there more planes en route? How do we protect ourselves? Are our families safe? 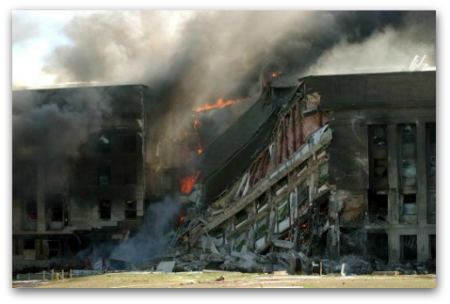 As the fireball of flames and smoke billowed from the west side of the Pentagon, Mullen's wife Deborah was driving across the 14th Street bridge, which crosses the Potomac River right next to the Pentagon.

That September 11 morning, Mrs. Mullen was driving from her home at the Washington Navy Yard to a meeting at the Naval Observatory just 6 miles away, and was redirected across the 14th Street Bridge by police, who were trying to control traffic in Washington.

She had been rushing to get ready for her meeting, and had not listened to the news, so she was not aware that planes had hit the Twin Towers. But as she came across the bridge, she could see the Pentagon.

"I knew something very bad had happened at the Pentagon, but it did not occur to me that we were under attack," she said. At the 12th Street exit, she turned around and headed back to the Navy Yard, now listening to news reports about the terrorist attacks.

"Of course I was worried," Mrs. Mullen said. "I knew my husband's office was on that side of the building, and all the other folks who were over there." When she reached home, she found a message from her husband that he was okay, but that they needed to get in touch with their children.

"I knew at that point that our lives had changed forever. I didn't know how they were going to change. I didn't know the extent, the enormity of what had happened. I just knew that we were under attack and [experienced] all those feeling you get of the uncertainty of life at that moment." 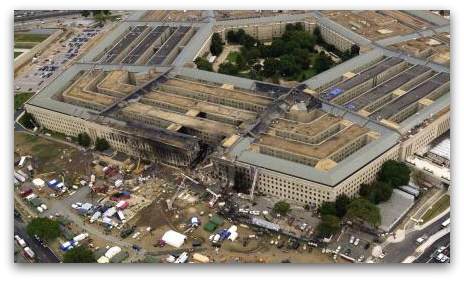 And our world has been uncertain ever since that September 11. 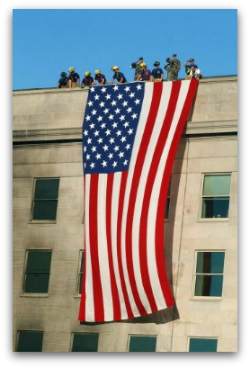 Ten years after that fateful day, Admiral Mullen says he is most inspired by the young people who sign up, raise their right hands and come to serve because of the attacks of September 11.

He added that the United States military is extraordinary because its service members recognize the need, have a strong desire to make a difference, and are wired to serve and to make that difference.

"We're blessed as a country to have them. We're blessed to have the families who raise young men and women" to serve their country, "and it makes me very proud, not just to be in the military or to be the chairman, but, quite frankly, to be an American."

Our thanks to Cheryl Pellerin, American Forces Press Service, for the information in this article. Photos courtesy Department of Defense.

Return to top of Remembering September 11

We Must Never Forget

This nugget fighter pilot launched September 11, 2001, on what was essentially a kamikaze mission, to take down Flight 93 (the plane that eventually crashed into a field in Pennsylvania). There wasn't time to load ammunition on the jet before it launched. The only weapon was the F-16 itself. Read her compelling story at The Washington Post.

USS New York, LPD-21, was built with tons of steel salvaged from the World Trade Center. She is designed to take terror to the enemy. Her motto: "Never Forget."

Dear Terrorists, an open letter to the terrorists, from a U.S. Navy pilot.

We Are the Nation, a moving prayer by naval aviation legend Commander John "Bug" Roach. 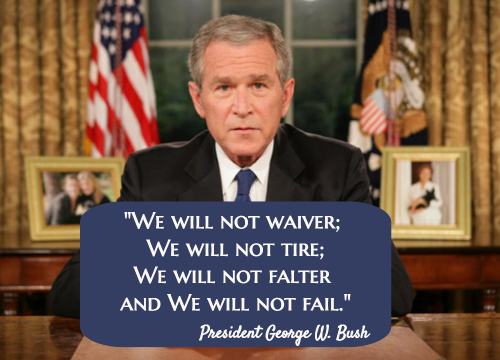 Site best viewed with Firefox
Home          Search          Privacy Policy          Contact Copyright © 2007-2016. All rights reserved. The information presented herein is for educational purposes only.
For advice specific to your particular situation,
please consult a qualified professional legal or financial adviser. DO NOT Copy without permission. Thank you. Military-Money-Matters.com participates in the Amazon Services LLC Associates Program, an affiliate advertising program designed to provide a means for sites to earn advertising fees by advertising and linking to amazon.com, as well as other affiliate referral programs. If you purchase a product linked from this site, we may receive a small payment from the merchant. Doing so does not increase your price in any way, but these small amounts allow us to present the information here at no charge to you. Thank you for supporting our efforts by making your purchases using our links.