Today marks the anniversary of the most horrific attack in history against the United States of America. It is this generation's Pearl Harbor.

It was a vicious attack, carried out by a ruthless enemy, deliberately designed to kill thousands of innocent civilians -- men, women and children.

Let us each pause today and remember how we felt that day, watching on television, dumbstruck as the Twin Towers of the World Trade Center billowed smoke and flame, and then collapsed into a smoldering pile of death and destruction.

Remember the confusion, the incomprehension, that horrible searing feeling in the pit of your stomach as you watched people jump to their deaths to escape the blazing inferno.

Remember the brave police officers and firefighters who rushed into the building to help those trapped inside, many of whom died as heroes that sad day. 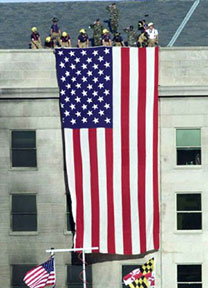 Remember the gaping hole in the side of the Pentagon, this nation's military fortress, and the hundreds of people who died there. Remember the image of the giant American flag draped over the side of the building as a reminder to both the American people and the terrorists responsible for the carnage, of America's strength, determination, and resiliency.

Remember the devastating sight of the aircraft wreckage and debris strewn across the field in Pennsylvania, and the brave souls onboard who were determined that their aircraft would not become another weapon in the hands of terrorists. Be grateful for the lives they surely saved, even as they sacrificed their own.

Take a minute to say a prayer today, that God will provide some comfort to the family members of all those who died on September 11, 2001 (now known simply as "9-11"), and to the families of the thousands who have died since then while serving in our military to protect the world from the ravages of terrorism.

Pray that God will bless and protect those brave Americans around the globe wearing the uniforms of the Armed Forces of the United States of America today, and keep them safe from harm. Pray that they will be returned safely to their families, who also serve as unsung heroes.

Pray for guidance and wisdom for our leaders as they chart the course forward in this war against an insidious enemy. Pray that God will continue to bless these United States of America, and that its citizens will have the collective wisdom to choose new leaders who will make the decisions that are in the best interests of all the American people, regardless of party affiliation.

And whatever else you do on this September 11, resolve that you will not forget, that you will not let your neighbor forget. Realize that in order to keep something like that from happening here again, we must remember how we felt that day, and we must have the resolve to take the fight to the enemy and continue the fight until the mission is accomplished.

The very best way to honor 9-11 victims and 9-11 families is to make certain that America remains strong and vigilant so that no other families have to endure those horrors in our nation's future.

USS New York, LPD-21, is built to take terror to the enemy. Her keel was forged from 7.5 tons of scrap steel taken from the World Trade Center. The ship's motto: NEVER FORGET!

For a reminder of just who we are as Americans, take a moment to read We Are The Nation, by naval aviation legend John "Bug" Roach.

Dear Terrorists, an open letter to the terrorists, from a U.S. Navy pilot.

Back to top of September 11.