When is it Appropriate for Veterans to Salute? 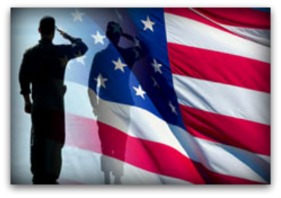 When is it appropriate for veterans to salute?

The U.S. Code title quoted in this article is:
SEC. 594. CONDUCT BY MEMBERS OF THE ARMED FORCES AND VETERANS OUT OF UNIFORM DURING HOISTING, LOWERING, OR PASSING OF UNITED STATES FLAG.

How about for the singing of the National Anthem or reciting the Pledge of Allegiance before a meeting?

On these occasions the appropriate civilian response has been to remove hat and place hand on chest, but as a Veteran, I have always felt like saluting. These ceremonies do not involve the hoisting, lowering or passing of the US Flag, but they do seem to follow in the spirit of this bill.

Do you have an answer?

Good catch, Howard. And thank you for your service.

You are absolutely correct that the original bill sponsored by Senator Inhofe changed only the U.S. Code section dealing with "hoisting, lowering or passing" of the flag. It was passed as part of the Defense Authorization Act of 2008.

Like you, it was our belief that the spirit of the law was to permit veterans out of uniform to salute in instances where they would have saluted if in uniform.

There are three separate Code sections that need to be changed to accomplish that, but only one was changed by the original bill. There are separate sections that deal with the national anthem and the pledge of allegiance.

Congress corrected their oversight the following year, by including in the Defense Authorization Act of 2009 an amendment that clarifies that veterans not in uniform are authorized to render a hand salute when the flag is raised, lowered, or passing, and during the national anthem and pledge of allegiance.

The new authorization is voluntary, and gives veterans the choice whether to honor the flag with the military hand salute or to honor her by standing at attention with their hands over their hearts, as non-veteran citizens do.

We think the important thing is that ALL Americans (including the hyphenated ones) are taught to show the proper respect to Old Glory and all that she represents, including those who have died to keep her flying free o'er the land of the free, and the home of the brave.

We all need to remember that we have the tremendous privilege of living in the land of the free precisely because of the brave, who were and are willing to risk all to keep us free.

Thank you for your question.