Veterans Salute the Flag
Covered or Not? 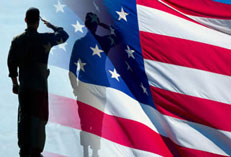 When a veteran salutes the flag during the National Anthem must they be covered or can they be uncovered - hats or no hats?

I will venture a guess, based on your question, that you were a member of the Naval Service (Navy or Marine Corps). Army and Air Force personnel salute while in uniform whether covered or not, but the Naval Service salutes only when covered, even in uniform.

The exact language of the act reads:

From this language, it appears to be acceptable for veterans not in uniform to render a military salute whether or not they are covered. And since it says, "all others" should remove their (covers), that seems to say it's acceptable for veterans who are saluting the flag to remain covered while doing so, but it is not necessary for them to be covered.

This particular language only covered saluting the flag when it was being raised or lowered, or was passing. The Defense Authorization Act of 2009 now clarifies that this provision also applies during the performance of the National Anthem or the reciting of the Pledge of Allegiance.

On the one hand, common sense would seem to say that in determining their course of action, veterans might simply render the same honors they would if in uniform. That seems to help simplify matters for many.

There are others who feel very strongly that they earned the right to salute Old Glory, and that in doing so, they honor not only the national colors, but all who have served her, and pay tribute to those who have made the ultimate sacrifice in her service.

". . . A recent change to the law has authorized active duty and retired servicemembers to salute the National Colors, whether covered or uncovered, indoors or out. By custom and tradition, Marines do not render the hand salute when out of uniform or when uncovered. Let there be no confusion; that has not changed.

During the playing of the National Anthem, or the raising, lowering, or passing of the National Flag, Marines will continue to follow Naval traditions and the policy/ procedures contained in reference (a) {the Marine Corps Drill and Ceremonies Manual}.

"The intent of this NAVADMIN is to eliminate any confusion regarding appropriate honors to the flag by Navy personnel. By custom and tradition, Navy personnel do not render the hand salute when out of uniform or when uncovered; that has not changed. . . ."

It then contains the same language as the ALMAR, making it applicable to sailors rather than Marines.

It goes on to say, "Leave no one to doubt the seriousness of our commitment or the depth of our pride."

I believe it is exactly the depth of that pride that is causing so many questions, as veterans out of uniform want to make sure they "get it right."

Notice that the Commandant refers to "active duty and retired servicemembers." He does not address separated veterans who are not retired.

So, on the one hand, you have the "Once a Marine, Always a Marine" crowd who says, "I will do whatever my Commandant tells me to do."

And then you have others who point out, "Well, he didn't (and can't) tell you what to do since you are a civilian and not in a pay status."

And Admiral Roughead addresses "Navy personnel" and "sailors," also not mentioning separated veterans or retirees. One might argue that retirees could be included in the term "Navy personnel" since retirees remain in a pay status.

I noted an astute comment on another discussion board by RADM John Bepko, USN (retired), former Deputy Commander, Military Sealift Command, who said,

"This issue of saluting when "Covered or not covered;" "in civilian clothes or uniform" is for the most part TOTALLY misunderstood by so many of you.

You, as American Citizens, have the right to honor the flag in whatever way suits you - as long as you violate no laws against desecration of the flag - and there are too few of those.

ALL Veterans were ALWAYS given the option of saluting. Who would ever tell them not to???

The new 'Law' changes nothing - just states what is a common practice.

I have saluted, and will always salute my flag -in uniform or out - covered or not. I, and all my fellow veterans have earned that right.

Stop quibbling over nonsense . . . you always had this right."

I have to say, he makes a lot of sense.

Bottom line for me:

The new law specifically makes it permissible for veterans not in uniform to salute the flag. It is not mandatory. It does not specify a right way or a wrong way.

As far as I am concerned, honoring our flag, and all that it represents, is the right thing to do, for every American. It doesn't matter to me whether the saluting veteran is covered or uncovered, or even what symbol or words are on his baseball cap. He's rendering his respect to our national symbol.

But if there's a guy wearing a head cover of any sort during the playing of the National Anthem or presentation of the Colors, he'd better be a veteran saluting!

Most veterans (this one included) take great pride in their service, and rightly so. They have earned the right, I believe, to salute our flag anywhere they choose. In doing so, they honor not only their own service, but that of every other veteran, both before and after them. And they remember and pay tribute to those who paid the ultimate price so they would continue to have the right to honor that flag.

Another benefit of having veterans salute the flag: youngsters may be prompted to ask questions of or about those veterans, and may learn respect for our flag and our veterans that they may not have learned in school or at home!

I can't imagine that anyone would ever be reprimanded for honoring our flag, and if that ever happens, there will be millions of veterans ready to bear arms again to protect and defend their right to do so!

What are YOUR thoughts about veterans saluting the flag? Click on the link below to add your comments to this discussion.


If you didn't find what you're looking for, use the search bar below to search the site: