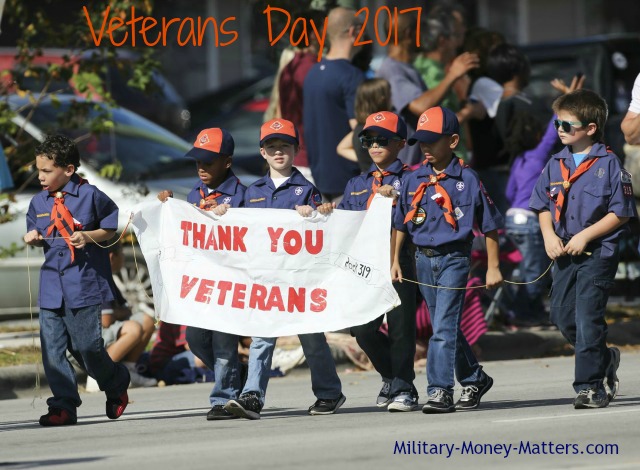 Veterans Day in the United States is celebrated on November 11th. Have you ever wondered how that date was chosen?

The Armistice which ended World War I (then called "The Great War") in 1918 was signed at "the 11th hour of the 11th day of the 11th month." Thereafter, November 11 was celebrated as Armistice Day, honoring all those who fought in The World War.

The name of the holiday was changed after World War II, in recognition that it is appropriate for America to set aside a day to honor all her military veterans.

I hope you'll join me in pausing for a moment of gratitude at 11:00 a.m. (wherever you are) on November 11th, to recognize the freedom that you enjoy as an American, and the tremendous sacrifices that have been made (and will continue to have to be made) to secure it.

For the major portion of American history, the military forces have been comprised of less than one percent of the population of this country.

During the Civil War (in which both sides were Americans), still only three percent of the population served in the military.  It's incredible to me that 97-99% of people who live in the U.S. depend on the other 1% for their freedom and safety, and many are so ungrateful for the sacrifices military members and their families make so that they and their families can enjoy the freedom of living in the U.S.A.

The largest percentage of our population ever to serve in the armed forces was twelve percent in World War II.

That twelve percent of the American population, now known as "The Greatest Generation," was responsible for changing the course of world history. Hitler was determined to rule over much of Europe, and Japan had her eye on the Pacific region.

Yet just twelve percent of Americans were able to turn the tide in both theaters, thanks to heroes like Audie Murphy and Charles Durning, both of whom have remarkable stories.

Fighting on opposite sides of the world at the same time, American troops (with the help of their Allies) were able to stop these two superpowers intent on subjugating their neighbors. Winston Churchill is famously quoted as having commented (paraphrasing): 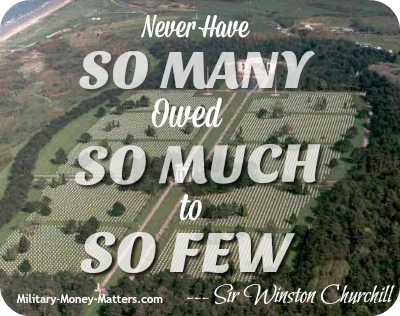 America lost much of that generation, who never made it home from the war.

In the four years that America was involved in World War II (1941 - 1945), 405,399 Americans were killed. That number represents three percent of the American population at the time, as counted by the 1940 census. Americans died at the rate of 416 per day, every day for those four years.

To put that number in perspective, if that number of people were residents of a single city today, that city would be the 44th largest city in the US.

In contrast to the extraordinarily high number of casualties in World War II, since America was catapulted into the War on Terror by the events of September 11, 2001, 6,920 American service members have given their lives in the cause of freedom (through November 9, 2017). That number represents .000022% of the American population as reported by the 2010 census, and a rate of roughly 1.2 deaths per day on average.

I present those numbers, not to diminish in importance those 6,920 deaths in any way, but just to provide a comparison and some perspective of the relative scale of the three conflicts. The loss of even one hero per day is a tremendous loss to our nation, and devastatingly so to their families.

Those of us born after World War II cannot fathom the massive scale of the war effort during that time, which involved and affected all Americans, as various goods were rationed. And yet, still only twelve percent of the population served.

Many attribute today's lower combat mortality rates to advances in military equipment and strategy, as well as advances in battlefield medicine. Many of those who survive their injuries today would not have survived in World War II, or even in Vietnam. Today's seriously wounded are on a medevac flight to a major military hospital within hours of their battlefield injuries, receiving state-of-the-art medical treatment from expert medical staff.

I personally am so proud of today's generation of warriors, and that other breed of warriors who, as military spouses, fight the battles at home so their spouses can serve. They are largely unsung heroes.

They act as Mom and Dad when their spouses are deployed, and take care of everything that has to be done at home. They are doing an amazingly difficult job, and have been in and out of combat status for the past 16 years. That is a tremendous strain on families, and they're to be commended for their strength and resilience and determination.

And I'm incredibly proud of our Vietnam veterans, who are largely responsible for raising awareness and seeing that today's troops receive expressions of gratitude rather than the despicable treatment Vietnam veterans received upon their return home. They, collectively, have vowed, "Never again will another generation of American warriors be mistreated as we were."

If you're confused by that statement, and are unfamiliar with the treatment that greeted Vietnam veterans when they returned home, take a few minutes to read the firestorm that Steven created with his claim that the reported mistreatment didn't occur.

This year, as you pause to thank the veterans you know, and to say "Welcome Home" to our Vietnam vets, take a moment to thank their spouses, too. You may also want to take a few minutes to learn about some more American heroes.

And help us remind the other 99% of Americans how important it is for them to recognize and appreciate the sacrifices that are being made on their behalf. Many of them don't have a clue, and THAT is an American tragedy.

So, from the bottom of my heart, THANK YOU to all who have served.

Please add YOUR thanks in the comments below.

And check out our list of Veterans Day Specials. A number of merchants are offering free meals to veterans as an expression of their gratitude. If you decide to take advantage of these offers, please remember your manners and thank the merchants for their generosity. And make sure your tip is based on the full value of the meal.

What is a Veteran?

I am a Veteran

It is the Soldier (or Veteran)

We Are the Nation

Before You Go - A Tribute to World War II Veterans

The Truth About Vietnam Vets

Veterans May Now Salute the Flag

VA Reaches Out to Veterans

Post your own message of thanks to our veterans

And while you're here, post your holiday messages for our troops.