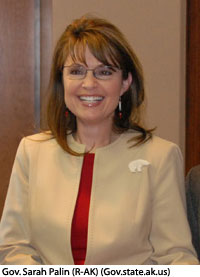 Sarah Palin is the US's answer to Margaret Thatcher!

Anyone who thinks she cannot handle the job or deal briskly and efficiently with ANY issue, including foreign governments? Well, they haven't met our Sarah.

As an Alaskan resident as well as a resident of Wasilla, AK, where Sarah Palin was at one time Mayor, I can speak with confidence.

Governor Sarah Palin of Alaska is exactly what she portrayed during her introduction and exactly what our US Government needs. She is ethical to a fault (if there is such a thing), a refreshing change to the status-quo and as smart and determined a PERSON (gender really isn't an issue here as far as I'm concerned) as anyone could ask for at the head of government.

Sarah is no naïve "small town mayor" - she just *started out* there. But, as Mayor of Wasilla, she brought this "small town" through a lot of GOOD changes and left it at the end of her term having grown to the 4th largest CITY in Alaska - a lot of growth and a stronger economic base than ever before.

She has EXECUTIVE experience *running a government* (something NONE of the other candidates can actually boast, even John McCain) as Governor of Alaska and got there by defeating the *incumbent* Republican Governor, who was definitely part of the "old school" and who WAS very much in the pocket of the big oil companies. We in Alaska wanted change - and we got it in the person of Sarah Palin!

Sarah Palin is everything she looks to be and more. Her approval rating as Governor of Alaska has been as high as 95% and is currently leveled out consistently in the upper 80 percentile throughout the state (and in both parties) - the HIGHEST approval rating of ANY sitting Governor.

Sarah has been turning around corruption in the Legislature of Alaska - turning things on their ear for that matter; cutting spending in spite of the increased income the state is currently receiving due to the high oil prices - she has insisted on putting a huge amount of the "windfall" into savings for the future rather than spending, spending, spending - and has insisted from the get-go on what she refers to as "honest, ethical and transparent governing" - no more closed door meetings and dealings - the big oil companies thought she would be a pushover and have learned better to their chagrin.

She understands the "real people" and the economic issues we all face (Alaskans along with the rest of the country) - she was one of "us" not long ago. Rather than passing useless "laws" or throwing money at pet projects, she (most recently) temporarily suspended the state gas tax (on gasoline at the pumps, fuel oil and natural gas for homes, etc.) and has ordered checks issued to ALL residents of Alaska this fall in an attempt to assist with the burden of high fuel costs for the upcoming winter. I could go on and on, but that's enough for now. She isn't doing these things to be popular - she is doing it because her constituents are HURTING financially and she can help.

She became Governor of Alaska by defeating the Incumbent Republican Governor and doing it *without* the money or the support of the Republican Party, which was amazing in itself - and she won by a landslide. The "powers that be" at that time totally underestimated Sarah and learned better the hard way.

She has done exactly what she claimed she was going to do and is just as popular today as the day she was elected - perhaps more so since even the Democrats up here seem to like her - she works well with both sides in the Legislature here.

Sarah "belongs" to us (Alaskans) ... and although we are going to be terribly sorry to see her leave before she finishes the job she started here (two years ago) straightening out OUR State, we understand she is needed for a bigger purpose. Hopefully her Lt. Governor will be able to fill her shoes here and continue the job.

As for worrying about what would happen if McCain were to die or step down or whatever ... up here in AK we've only been wondering how long we would be able to KEEP Sarah in Alaska and have seen her as our first woman President of the USA from the start. It's always been a matter of whether she would wait until the end of her TWO terms as Governor (no doubt at ALL that she would be re-elected if she ran for a second term at the end of her current term) ... or end up in Washington sooner. She could do the job TODAY.

Personally, I feel a lot better about McCain now that I know he has someone as savvy, as strong, as ethical and as steady as Sarah at his back.

She will be an excellent Vice President ... and my guess is will be our US Republican Presidential candidate in four years - AND by then the country will KNOW her - will love and respect her as we do here - and she'll win by as much of a landslide as she did here in Alaska.

I only wonder if McCain has a clue what he is unleashing on the US of A. She is going to be a fresh wind, but also a strong wind.

Is that enough of an endorsement?

If not, I'll add this ... Jerry and I have for many years felt the best "vote" was to vote for the lesser of two "evils" and hope they didn't do too much damage.

Two years ago during our State Governor's race was the first time EVER that we actually asked for not just a little sign to put in our yard showing our support of our candidate (something we've never felt the desire to do at all before) - we asked for a full 4' x 8' "SARAH PALIN FOR GOVERNOR!" sign and were proud to have it.

She hasn't let us or Alaska down. She will do the same for the USA if given the opportunity.