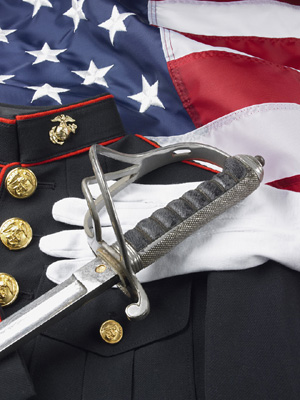 This letter from the Marine officer in charge of the Berkeley Marine Officer Recruiting Office to the members of Code Pink is exactly what one would expect from a Marine officer - measured, polite, respectful, to-the-point, and deadly accurate!

"While the protest that you staged in front of my office on Wednesday, Sept. 26th, was an exercise of your Constitutional rights, the messages that you left behind were insulting, untrue, and ultimately misdirected.

Additionally, from the comments quoted in the Berkeley Daily Planet article, it is clear that you have no idea what it is that I do here. Given that I was unaware of your planned protest, I was unable to contest your claims in person, so I will therefore address them here.

First, a little bit about who I am: I am a Marine Captain with over eight years of service as a commissioned officer. I flew transport helicopters for most of my time in the Marine Corps before requesting orders to come here.

Currently, I am the officer selection officer for the northern Bay Area. My job is to recruit, interview, screen, and evaluate college students and college graduates that show an interest in becoming officers in the Marine Corps. Once they've committed to pursuing this program, I help them apply, and if selected, I help them prepare for the rigors of Officer Candidate School and for the challenges of life as a Marine officer. To be eligible for my programs, you have to be either a full-time college student or a college graduate. I don't pull anyone out of school, and high school students are not eligible.

I moved my office to Berkeley in December of last year. Previously, it was located in an old federal building in Alameda. That building was due to be torn down and I had to find a new location. I chose our new site because of its proximity to UC Berkeley and to the BART station. Most of the candidates in my program either go to Cal or to one of the schools in San Francisco, the East Bay, or the North Bay. Logistically, the Shattuck Square location was the most convenient for them.

Next, you claim that I lie. I have never, and will never, lie to any individual that shows an interest in my programs. I am upfront with everything that is involved at every step of the way and I go out of my way to ensure that they know what to expect when they apply. I tell them that this is not an easy path. I tell them that leading Marines requires a great deal of self-sacrifice.

I tell them that, should they succeed in their quest to become a Marine officer, they will almost certainly go to Iraq. In the future, if you plan to attack my integrity, please have the courtesy to explain to me specifically the instances in which you think that I lied.

Next, scrawled across the doorway to my office, you wrote, "Recruiters are Traitors." Please explain this one.

Or do you only consider me a traitor while I am on this job? The fact is, recruitment is and always has been a part of maintaining any military organization. In fact, recruitment is a necessity of any large organization. Large corporations have employees that recruit full-time. Even you, I'm sure, must expend some effort to recruit for Code Pink. So what, exactly, is it that makes me a traitor?

The fact is this: any independent nation must maintain a military (or be allied with those who do) to ensure the safety and security of its citizens. Regardless of what your opinions are of the current administration or the current conflict in Iraq, the U.S. military will be needed again in the future.

If your counter-recruitment efforts are ultimately successful, who will defend us if we are directly attacked again as we were at Pearl Harbor?

Who would respond if a future terrorist attack targets the Golden Gate Bridge, the BART system, or the UC Berkeley clock tower? And, to address the most hypocritical stance that your organization takes on its website, where would the peace keeping force come from that you advocate sending to Darfur?

Finally, I believe that your efforts in protesting my office are misdirected. I agree that your stated goals of peace and social justice are worthy ones.

War is a terrible thing that should only be undertaken in the most dire, extreme, and necessary of circumstances.

However, war is made by politicians. The conflict in Iraq was ordered by the President and authorized by Congress. They are the ones who have the power to change the policy in Iraq, not members of the military. We execute policy to the best of our ability and to the best of our human capacity.

Protesting in front of my office may be an easy way to get your organization in the headlines of local papers, but it doesn't further any of your stated goals.

To conclude, I don't consider myself a "recruiter." I am a Marine who happens to be on recruiting duty. As such, I conduct myself in accordance with our core values of honor, courage, and commitment.

I will never sacrifice my honor by lying to anyone that walks into my office. I will never forsake the courage that it takes to restrain myself in the face of insulting and libelous labels like liar and traitor. And, most importantly, I will never waver from my commitment to helping individuals who desire to serve their country as officers in the Marine Corps."

We applaud Captain Lund for his professional dedication to his Corps and country, and his decorum in responding to the vile epithets that have been hurled his way. Like his fellow Marines and other service members, he serves with dignity, dedication and pride, and we thank them all.