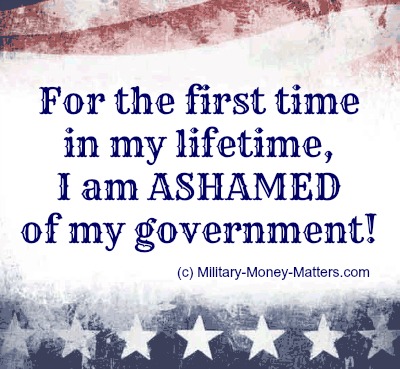 To paraphrase a famous quote from Michelle Obama, “For the first time in my adult lifetime, I am ashamed of my government.”

In the past, I have been embarrassed by my government, but this is the first time I've ever been actually ashamed of my government.

This is an article I never wanted to write, and I’m outraged that it is now necessary.

The Obama administration (I refuse to use a capital “A”), in the ultimate betrayal of every man and woman who has ever worn the uniform of the United States of America, has allowed the partisan bickering and devisiveness that has been its hallmark to deny the payment of death benefits to the survivors of service members killed in action since September 30.

2) causing unnecessary stress in every military household (which, thankfully, Congress resolved before military paychecks were delayed, for now at least), and

3) closing open-air war memorials to the very veterans they were erected to honor,

the heartless and evil officials of this government have now unbelievably violated a sacred trust with America’s service members.

I am dumbfounded and disgusted.  Outraged.  Incredulous.  Distraught.  And yes,  I’m mad as hell.

This is something I would never have believed would be allowed to happen in this country.  Anyone who has read my writing for any length of time will know that I am not a fan of Barack Obama.  He seems to be the embodiment of the old joke about politicians, “How can you tell he’s lying?  His lips are moving.”

And he and his henchmen have now demonstrated that they have absolutely no respect for the sacrifices being made on a daily basis by our military families, despite the lip service PR put out by the administration, and the “military family programs” touted by Michelle Obama and Dr. Jill Biden.

A Slap in the Face

At a time when military families are suffering the most, struggling to survive more than 12 years of combat cycles with life and limb and marriages intact, the Obama thugs have decided to add a slap in the face.

Each one of the previous 43 Presidents would have immediately put a stop to such a gross injustice.  Not this embarrassment.  He’s taken our country to yet another new low.  It has now been 10 days that this situation has existed, and it took a civilian charitable organization to come to the aid of our service members, not the government which they serve.

An Abdication of Responsibility

Defense Secretary Chuck Hagel issued the following statement, “I am offended, outraged, and embarrassed that the government shutdown had prevented the Department of Defense from fulfilling this most sacred responsibility in a timely manner. In the days before the shutdown, we warned Congress and the American people that DoD would not have the legal authority to make these payments during a lapse in appropriations.

"In the days after the shutdown, Departmental lawyers and budget officials pursued every tool and option at our disposal in an effort to provide these benefits. Even under the Pay Our Military Act, we found that we lacked the necessary authority to make payments to the families directly.”

California Republican Representative Duncan Hunter, Jr., stated in a letter to Secretary Hagel, “The intent of Congress was to permit D.O.D. to honor all payment and allowances to service members.

"The department’s decision to not make these payments is a matter of choice,” he added. “And until a correction is made to the law, it is up to you to make the appropriate judgment based on a more correct interpretation.”

Hagel criticized Congress for abdicating its responsibilities.  Seems to me you’ve abdicated yours as well, Mr. Secretary.

Secretary Hagel, I too am “offended, outraged and embarrassed” that you cared more about keeping your phony-baloney job than about doing the right thing for our military families.  A real man would have stood up to the political hacks that caused this problem and issued the checks anyway.  Even if you didn’t have the legal authority to do so, it wouldn’t be the first time government funds were used illegally, now, would it?

Hell, the Pretender in Chief doesn’t have the legal authority under our Constitution to sit in the White House, either, but it didn't keep him from moving in, and he’s still there, isn’t he?

Just try for a moment to put yourself in these families’ shoes.  Your loved one (husband, wife, son, daughter, mother, father) has just died in service to this country, and instead of the respect and gratitude you deserve (and the benefits your loved one was promised), you’re told that you won’t be receiving the $100,000 death benefit that was promised to you because a bunch of petulant children sitting in the Capitol building are playing chicken, waiting to see who will blink first.

Let’s face it, $100,000 is already woefully inadequate to take care of the young family of a twenty-something service member killed in action, but now the government is telling you, “Sorry, I realize your loved one is dead, and because of that we’ll be stopping his (or her) paycheck immediately, but we can’t pay you this money that was intended to help you stabilize your financial situation during this very stressful time.  It’s your tough luck that your loved one was killed after September 30.  You just have to wait till the juveniles in Congress get tired of playing with peoples’ lives, on issues that don’t affect them, before we can pay you the benefits you were promised.”

Not only is the administration refusing to pay the death benefit (what an oxymoron!), it also is refusing to fly family members to Dover to receive the remains as they are repatriated to American soil.  I can only imagine the additional trauma this has caused to these already-traumatized families, and I am truly ashamed of my government for such callous disregard of the ONE percent of Americans who make SO many sacrifices to assure the freedom of the other 99 percent.

Patriots at Fisher House Honor Your Sacrifice,
Keep the Trust Broken by the Government

Thankfully, there are American patriots who recognize the sacredness of this trust, who have stepped up to fill the gap.  Fisher House CEO Ken Fisher has announced that the Fisher House Foundation will pay the death benefits to these family members, and under its Hero Miles program, fly them to Dover at no expense to the family.

It is a fitting tribute to the legacy of Fisher House founders Zach and Elizabeth Fisher, who would no doubt have done exactly the same thing.  America’s military members and first responders have always had steadfast support from Zach Fisher and his brothers.  (If you’re not familiar with the story of this patriotic immigrant family, please follow the link and learn about Zach Fisher in our tribute to heroic actions.)

We have long recommended Fisher House Foundation as one of the best military and veterans charities to which you can donate, and this is yet another reason to support them.

Throw the Bums Out at Election Time

As for the politicians who caused this to happen, THROW THE BUMS OUT!  I urge you to remember this debacle at election time, and to vote against every incumbent Democrat or Republican who aligns him or herself with this anti-American administration.

The motto of today’s democrats seems to be, “Repeat the same lie often enough, and people will start to believe it’s true.”  The corrupt mainstream media is the mouthpiece through which they continue to repeat those lies.

So, despite the fact that the Republican House has passed a number of bills to fund portions of the government to reduce the pain for the American public, the Democrat Senate refuses to consider them.  And various government employees have confirmed that they were instructed to make the public feel the pain.

Yet you will hear Harry Reid and Barack Obama disingenuously calling it “the Republican shutdown.”  Sounds to me like it should be the Barack Obama – Harry Reid shutdown.  And I hope you will remember that a year from now, in the mid-term Congressional elections.

The President’s Golf Course at Andrews AFB remained open, as did the First Lady’s “Let’s Move” website, but the War Memorials, Commissaries and some government websites were shut down.

At fcc.gov, we found a message that says:  “We regret the disruption, but during the Federal Government-wide shutdown, the FCC is limited to performing duties that are immediately necessary for the safety of life or the protection of property. FCC online systems will not be available until further notice.”

The FTC’s site says simply: “Unfortunately, the Federal Trade Commission is closed due to the government shutdown.” No manpower is needed to keep pages online – they’ll stay there until taken down, so someone had to actively go in and shut down these sites.  How stupid. And vindictive.

Just like sequestration, the Democrats are determined to maximize the disruption and inconvenience to the American people.  I have never seen more disgraceful manipulations by politicians, and I am disgusted at their childish pettiness.  Let's give them a taste of the sudden termination of paychecks -- next election!

Yes, “non-essential” government workers were furloughed, and military death benefits won’t be paid on time, but if you requested an extension to file your federal income tax return, you still have to meet the Oct. 15 deadline, or pay penalties and interest!

To those military families who have been affected by this administration’s callous disregard for your sacrifice, I offer my profound apologies on behalf of all the American patriots who, like me, are today ashamed of our government.

We gratefully acknowledge and appreciate the service of your loved one, and we will never forget.  Thank you, from the bottom of my heart, for raising such fine men and women, dedicated to keeping our nation safe and free.  Thank you for molding a hero who gave his or her life so that others might remain free.

God bless you, and help you heal from your terrible grief and pain.  May He hold you in His loving embrace until you are reunited with your loved one.

Clinging to my Bible and my flag (yes, Michelle, THAT “damn flag”), I remain true to my oath to protect and defend our Constitution from ALL enemies, foreign AND domestic.

I hope you’ll join me, and help return OUR United States of America to the great nation it once was, thanks to the wisdom and foresight of our founding fathers.  By returning to the principles they set forth in our founding documents, we can restore the America we love.  Are you ready?

Zach Fisher, one of only two Honorary Veterans of the U.S. Armed Forces