These terms are used to describe what has often been called the turning point of World War II, when American and Allied Forces mounted the largest amphibious assault in history, to free Europe from the occupation of Hitler's Third Reich.

Roughly 155,000 Allied troops went ashore that day at Normandy, on the northern coast of France. Three thousand of them gave their lives before the day ended, to free the people of Europe from the stranglehold of German occupation. 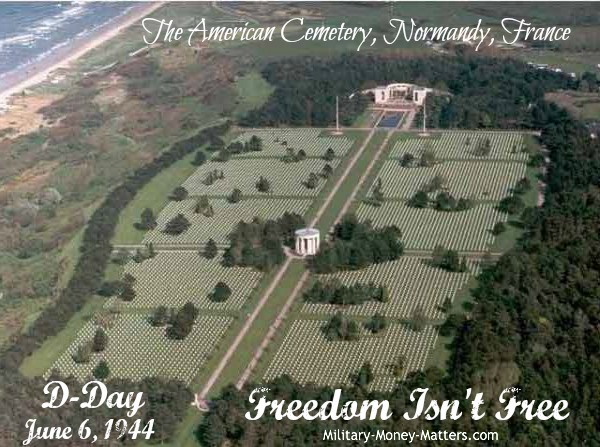 The landing was originally planned for June 5, 1944, but because of bad weather, the assault had to be delayed for 24 hours. It had to be conducted during the period of the full moon, to provide some light for the pilots and landing troops. If the window were missed and the mission had to be scrubbed, it would be a month before another attempt could be made. The forecast indicated a slight clearing the following day, so the decision was made to proceed.

Beginning shortly after midnight on June 6, 13,000 US paratroopers from the 82nd and 101st Airborne Divisions, in two drops that each involved approximately 400 C-47 aircraft, were dropped behind enemy lines. Their mission: to secure some bridges, destroy others, and destroy German artillery and emplacements. Later drops of gliders, before dawn, brought in support troops and artillery, including howitzers, for the paratroopers' use.

The first wave of landings began at approximately 6:30 a.m., and were supported by both aerial and naval bombardment. There was a general sense of confusion, and the landing forces discovered that they had drifted off-course to the southeast.

Brigadier General Theodore Roosevelt, Jr., the Assistant Commander of 4th Division, landed with his unit at Utah Beach. When he realized they were not where they were intended to be, Roosevelt is famously quoted as saying, "Well, then we'll start the war from right here."

Roosevelt had already had to fight quite a battle with his superiors just to be allowed to go ashore with his troops on D-Day. Part of his argument, it has been reported, was that his presence would give his men confidence. "'After all,' they'll say, 'if a General is going in with us, it can't be expected to be too bad.'" He was the only general to go ashore with the first wave.

Armed with only a pistol and walking with a cane due to arthritis, Roosevelt led several assaults along the beachhead in what then-Lieutenant General Omar N. Bradley, commander of the US 1st Army and of the overall amphibious operation, would later describe as the single bravest act he witnessed in the entire war.

Landing elsewhere on the Normandy beaches that day was Theodore Roosevelt, Jr.'s own son, Quentin Roosevelt II (named after Teddy's late brother Quentin), who was returning to combat after being severely wounded in the North African campaign. Theodore Jr. and Quentin II were the only father-and-son pair known to have landed in Normandy on D-Day.

Teddy Jr. was awarded the Medal of Honor for his actions that day. Sadly, he died of a heart attack only five weeks later, and is buried in the American Cemetery in Normandy.

The two Theodore Roosevelts are only the second father-and-son pair in American history to be awarded the Medal of Honor, both awarded posthumously. (The other pair was Arthur and Douglas MacArthur.)

Some of the units coming ashore that day had to scale 100-foot vertical cliffs immediately beyond the beach, with enemy fire raining down on them. How did they find the strength and courage?

Listen to the radio address to the nation by President Franklin Delano Roosevelt on June 6, 1944, and his prayer for the troops involved (and then tell me this is not a Christian nation):

One of the young privates landing on Omaha Beach on D-Day was Charles Durning. Yes, THAT Charles Durning, the Hollywood actor you know from such films as The Sting and The Best Little Whorehouse in Texas. He was the 2nd guy off his landing craft that day - the 1st and 3rd were killed as they exited the craft.

They were supposed to have been dropped close enough to wade ashore. But when Durning stepped off the landing craft, he was suddenly in 60 feet of water, with a 60-pound pack on his back. Obviously, if he was going to survive, he had to get rid of all that gear. Listen to the emotion in his voice as he remembers the story some 65 years later:

I find it very sad that there doesn't seem to be the focus there should be on US history in our school systems today. It seems the details of the sacrifices made by these American heroes are dying along with them.

These brave veterans, who changed the course of history and liberated the European continent from the grasp of an evil dictator, are dying at a rate of more than 2,000 a day. Even the youngest of them are now in their late 80's.

Please be sure to express your gratitude to them at every opportunity. They lived through hell on earth, and we must never forget their service and their sacrifice. In my travels through France some 60+ years after the war ended, I personally have been thanked by French people for what America did for France in World War II.

The people of France will never forget:

I hope we will do as good a job of teaching our children the history of World War II. For those who forget history are doomed to repeat it.

Except that this time, it may be the American homeland that is invaded by forces determined to destroy us and our way of life. We cannot allow that to happen. Stand behind today's brave servicemen and women, and support them as they fight to protect our homeland from foreign invasion. And thank them whenever you have a chance.

It seems many Americans remember Pearl Harbor Day (December 7, 1941), but not as many remember D-Day. At least, I don't hear it mentioned as often, particularly outside veterans' circles.

Those brave men who stormed the beaches of Normandy on June 6, 1944, deserve to be remembered for the heroes they are. More than 9,000 Americans are laid to rest in the American Cemetery in Normandy, on a cliff overlooking Omaha Beach.

We salute D-Day veterans today, along with all World War II veterans, and extend our eternal gratitude to them for the freedom we enjoy.

May God bless you and your families, each and every one.

Before You Go, a musical tribute to World War II veterans by Dr. Sam and the Managed Care Blues Band. 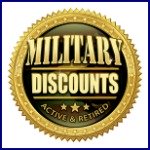 As your next step to success, join our community - so that we can let you know about financial and other general information of interest to military families. You'll also receive additional information not posted on the site. (We send out free goodies on occasion, too, so don't miss out.)

We'd love to have you join us! We promise not to fill your inbox with junk, and to never share your email address. Period.