Can a Good Muslim be a Good American? 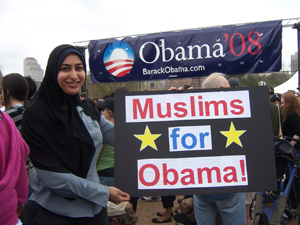 Can a good Muslim be a good American?

This question was forwarded to a friend who worked in Saudi Arabia for 20 years.

The following is his reply:

Theologically - no. . . . Because his allegiance is to Allah, The moon god of Arabia.

Scripturally - no. . . . Because his allegiance is to the five Pillars of Islam and the Quran (Koran).

Geographically - no. . . . Because his allegiance is to Mecca, to which he turns in prayer five times a day.

Socially - no. . . . Because his allegiance to Islam forbids him to make friends with Christians or Jews.

Politically - no. . . . Because he must submit to the mullahs (spiritual leaders), who teach annihilation of Israel and destruction of America, the great Satan.

Domestically - no. . . . Because he is instructed to marry four women and beat and scourge his wife when she disobeys him (Quran 4:34)

Intellectually - no. . . . Because he cannot accept the American Constitution since it is based on Biblical principles and he believes the Bible to be corrupt.

Philosophically - no. . . . Because Islam, Muhammad, and the Quran do not allow freedom of religion and expression. Democracy and Islam cannot co-exist. Every Muslim government is either dictatorial or autocratic.

Spiritually - no. . . . Because when we declare 'one nation under God,' the Christian's God is loving and kind, while Allah is NEVER referred to as Heavenly father, nor is he ever called love in The Quran's 99 excellent names.

Therefore after much study and deliberation. . . . Perhaps we should be very suspicious of ALL MUSLIMS in this country. - - - They obviously cannot be both 'good' Muslims and 'good' Americans.

You had better believe it.

The more who understand this, the better it will be for our country and our future. The religious war is bigger than we know or understand. . . .

And Barack Hussein Obama, a Muslim, wants to be our President?

You have GOT to be kidding!

Obama even says if he wins the election, he will be sworn in on the Quran---not a Bible!

Footnote: He was sworn in on the Quran for his current office and he refuses to pledge allegiance to the United States or put his hand over his heart when the National Anthem is played!!!

The Muslims have said they will destroy us from within. . . .

Hello!!!! Is anyone listening?

Having a Muslim president would seem to fit the bill!

Would you trust this man with our national secrets?????