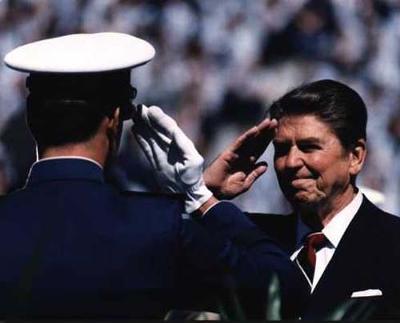 President Reagan was a strong supporter of our military

When I first went to work for Reagan in his campaign for Governor of California in 1966 and then into the Governor's Office, he was always concerned about the well-being of our military men and women. He had a well known picture-perfect love affair with his wife, Nancy, but they both also shared a deep love for our troops.

When the American POWs came home from Viet Nam, the Reagans opened their home and hearts to these heroic men. People will never know of the personal acts of kindness and generosity the Reagans put forth. He deeply cared for our troops, and they knew it and replicated their affection for him whenever they could.

Most scholars and election experts consider the Presidential debate in Nashua, New Hampshire, to be the turning point in the campaign that really put Reagan on the course to not only defeat George Bush, Bob Dole, Howard Baker, Phil Crane, John Connally and the others in the Primary, but also President Jimmy Carter in the November election.

Reagan clearly articulated to the voters his vision of America. One of his clear and unequivocal statements was, "We should never let young men die in a war that their government is afraid to let them win."

Since I was close to doing my military service during the time I worked for Reagan in the Governor's Office, we often talked about the war in Viet Nam and his strong feelings that we should never commit our troops to combat unless we were willing to go all out. He often said we should win the war or get out.

That is why it was so heartbreaking for him when one of the first battles of the war on terror took place at the Marine Barracks in Lebanon. He felt so badly he had put our troops in there without sufficient safeguards. After leaving the Presidency and coming back home, he said, "Sending our boys to that place is the most anguishing regret of my years as President." 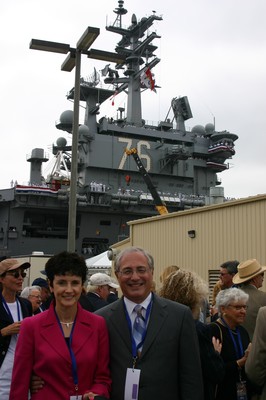 My wife and I were honored to be included in the Home Porting ceremony of the U.S.S. Ronald Reagan aircraft carrier (shown behind us in the photograph). President Reagan had passed shortly before the ceremony, which made the occasion more somber for those who had worked for him. Mrs. Reagan was radiant and beautiful as always as she addressed the huge crowd during that difficult time.

We all couldn't keep from talking about what 'The Gipper' would be saying at this ceremony. I can tell you that he would have been a little embarrassed - he was so humble.

But, I know he would have been so proud to see this magnificent ship with American military men and women all spruced up for the occasion. He would have loved every minute of it, and it would have taken quite a few tugs by his advance staff to get him to leave.

Today so many Americans think about how and where we can find another Ronald Reagan. We cannot, for he was surely one of a kind. But we can keep his ideals and principles, his profound belief in the goodness of America and her people, fresh in our thoughts. I know you also share his love for our military. So I hope you will support them today.

I know President Reagan would consider it an honor if you would choose his birthday as an appropriate time to sponsor a care package for our troops in Iraq and Afghanistan, and enclose a special message from your heart to our troops. You can do that by clicking here:

Join in and write your own page! It's easy to do. How? Simply click here to return to Reagan Birthday.