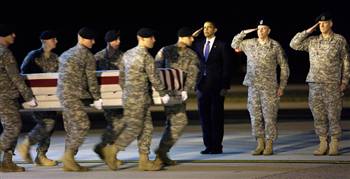 I saw President Obama render a military salute when honoring KIAs at Dover AFB. He is a civilian in civilian clothes. He is not a veteran.

Is he entitled to render the salute or is his proper sign of respect a hand over his heart?

We suspect many Americans may also be wondering with you if a presidential salute is authorized in this, or any other, setting.

There was quite a bit of publicity following Obama's appearance at Dover AFB, Delaware, to pay his respects as the remains of fallen service members and DEA agents killed in Afghanistan were returned to the United States.

Many critics roundly criticized Obama, who almost immediately after taking office in 2009 lifted the ban on photographing the return of fallen service members. Was he really paying his respects? Or was he just exploiting these soldiers who gave the ultimate sacrifice by grabbing a photo opp - maybe hoping to deflect some of the criticism stemming from his delay in deciding on a request by Gen. Stanley McChrystal to send more troops to Afghanistan?

Now-famous photos of Obama on the presidential campaign trail failing to place his hand over his heart (and instead offering his "crotch salute") during the performance of the national anthem add fuel to the firestorm of criticism. 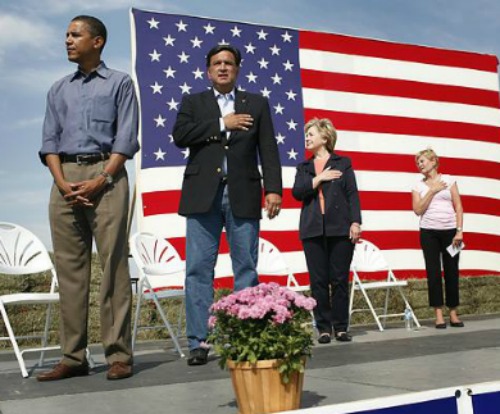 According to FoxNews.com, President Ronald Reagan began the practice of saluting members of our armed forces in 1981. Such salutes are generally not rendered by one not in uniform, even active duty service members.

No American president before Reagan had ever returned a salute, including former five-star Army General Dwight D. Eisenhower. Customarily, an officer in uniform does not salute enlisted personnel or officers of lower rank.

The military salute is a sign of respect, rendered to one senior in rank, which is then returned by the senior as a sign of mutual respect.

The president traditionally is briefed on proper military protocol by the White House military office, which is staffed by members of each service. But according to Nancy Brinker, President George W. Bush's former chief of protocol, the president generally makes decisions about how he wishes to conduct business, and some customs can be altered.

President Obama broke from military protocol early in his presidency by extending his hand to shake that of an enlisted Marine standing in salute at the base of the steps to Marine One, the president's helicopter. The startled Marine shook the president's hand, and then resumed his salute. 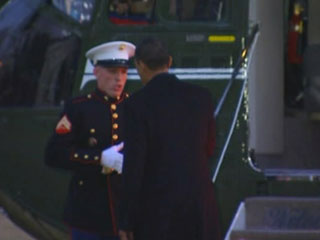 President Obama startles saluting Marine by reaching out
to shake his hand in this FOX News Channel photo.

Federal statutes specifying flag protocol limited the right to salute the flag to those currently serving or veterans who have previously served in the military, when in uniform. That law was amended in 2008 to permit veterans to render military salutes to the flag even when not in uniform.

The only exception is the sitting president, because he is also Commander-in-Chief of our nation's military.

Only two presidents in recent history have never served in the military - Barack Obama and Bill Clinton, both Democrats.

Every other American president since the end of World War II has served in our military during times of war:

So John, the short answer to your question is yes, by virtue of his position as Commander-in-Chief (which is questioned by many), Barack Obama is authorized to render a presidential salute in this situation.