Obama Turned His Back on Our SEALs in Benghazi 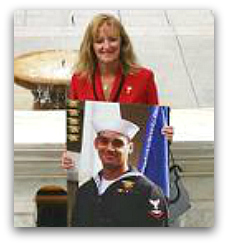 Debbie Lee with photo of her son Marc

"I am furious how Obama and his administration have covered up, excused and lied about what happened in Benghazi.

It is treasonous that they were willing to sacrifice and turn their backs when we were attacked.

Three different times Navy SEALs Tyrone Woods and Glenn Doherty were told to stand down. Finally they knew the right thing to do was to go and try and defend our consulate that was under attack, that's what SEALs do.

Our President and his staff watched real time for 7 hours and did NOTHING - no planes were sent in, no Rapid Response team, no military, NOTHING.

There is blood on their hands and I will lead the charge to see that they are held accountable.

President Obama turned his back on our SEALs!"

Debbie Lee is a Gold Star Mother whose youngest son, Marc Alan Lee, was the first Navy SEAL to give his life in Iraq. On his final day, Marc deliberately drew enemy fire three separate times, creating a diversion which allowed the rooftop evacuation of a severely-injured team member.

Debbie traveled to Iraq, and donned body armor and a kevlar helmet to walk down the street where her son died, and to meet the Iraqi people whose freedom he died for.

Debbie has dedicated her life to being Marc's voice, and to that end, has founded America's Mighty Warriors.

To learn more about this remarkable woman, and her hero son, you may be interested in these pages:

Are You Making Your Mark?

Join in and write your own page! It's easy to do. How? Simply click here to return to Benghazi Cover-Up.