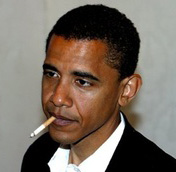 I strongly agree with this Soldier.

I have two sons in the milletary and am very scared of what's going on with the world.

I think he should show where he was born - if he is a United States citizen then prove it - what is he scared of?

He sure don't like white people. Neither does any of his cabinet. A Mexican U.S. Supreme Court Justice? She also hates whites.

Also no smoking in the millatery - what's that? They can die for this country but can't smoke or drink. Hey Oliver Stone says smoke a joint heightens your perception and they might need it to calm them down. I say go for it, buddy.

Obama should have to prove he's a U.S. citizen -- What's he scared of?

Ed. note: Ummm, Tammy, just so we're clear -- the proposed ban on smoking in the military would be a ban on regular tobacco. Smoking (or even possessing) marijuana is already illegal, and has been for a very long time. The Defense Department estimates it spends a BILLION dollars a year due to tobacco-related health problems, but Defense Secretary Robert Gates has said he will not ban tobacco in combat zones.