(No, that is not a Hillary ‘mis-remembered' moment.)

When Hillary was 24, she was ensconced safely at Yale Law, planning a political future and studying defensive ploys to aid the Black Panthers.

Maybe Melanie Morgan should be running for President now, and Hillary Clinton should be in boot camp.

Taking on the Loony Left Is Not for Wimps and Whiners

I would have paid good money just to see Melanie Morgan face off with Medea Benjamin, of Code-Pink notoriety. 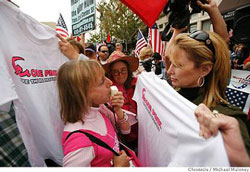 Medea Benjamin is a mousey little woman, a real rabble-rousing lover of dictators everywhere, who takes great pride in being arrested for uncivil behavior, and seems to love taking advantage of our national tolerance for idiocy. Ferocious Melanie has taken her on, personally, in Berkeley and elsewhere. No one ever need worry over telling the two apart. Medea will always be the one spitting on or burning our flag, while Melanie is backing Medea into a corner and verbally annihilating her disgraceful disrespect for our Country.

When I asked Melanie recently about her passionate convictions and their personal toll, she wrote:

My answer to the first part of the question is that I am unaware of any waivers that allows a 51-year old woman to fight in war, but I would be proud to go if I could.

At the January push-back against the Code Pink traitors (who have sent $600,000 to the families of the terrorists) I was jeered again for not 'sending' my son into battle, while the teenage hooligans and their enablers from the World Can't Wait, Funk the War and International A.N.S.W.E.R. were hitting elderly women and other pro-troop supporters carrying American flags. 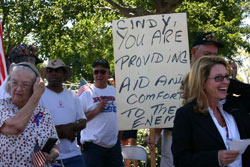 As the morning wore on, I called my husband and son to tell them I was okay, even as they were watching the video images of the violence on TV. My husband told me just minutes earlier, FedEx delivered a box to the house.

My 16-year old son raced for the door. He knew what was inside. It was papers from the Marine Recruiting office in Berkeley.

I was absolutely shocked, and Mommy tears started flowing with pride and worry. I must tell you that in one single instant I understood the sacrifice of every military family member, and that made me admire them in an emotional way that I have never felt before.

If my son chooses to go into the military, it places a burden of worry on me that no one can understand until it happens. But it thrills me with pride that I helped to raise a child who understands the notion that America counts, we are a loving nation willing to fight for our freedom and for others, and that the X-Box generation isn't so consumed with 'American Idol' that they reject the concept of service and sacrifice.

I am equally proud of the military recruiters who are quiet, dignified and dedicated in their job to bring young men and women into the brotherhood. Their job is made so much more difficult thanks to the hatred by the Left.

I couldn't have said this better myself, and that's ground I rarely give to anyone.

Of course, Melanie is also a writer herself.

(Is there anything this woman cannot do?)

She writes a weekly column for World Net Daily and co-wrote the book American Mourning, with Catherine Moy, another of Move America Forward's stalwarts.

Getting to know Melanie Morgan has been a very humbling experience for me. I like to think that I am good with words and that what I write is some sort of public service. But when I meet someone like Melanie, who is truly moving mountains on the home front of this war, without any compensation or pomp or celebration, I am reminded that we must all do more.

Move America Forward is paying public tribute to Melanie this Saturday in San Francisco, and I wish I could be there. But more than a celebration of Melanie's home-front heroism, this dinner is a fundraiser for Move America Forward's never ceasing efforts to defend our troops and their recruiters stateside. While our taxes go to pay the ACLU to sue every Tom, Dick and Harry that offends them, we citizens must voluntarily foot the bill and do the work to defend our right to raise an army.

Maybe only a few of us can be the ferocious home-front warriors like Melanie Morgan, but all of us can and must do more.

As Lt. Col. (ret) Steve Russell told an audience in Nashville, TN, as part of the National Heroes Tour:

"We cannot afford to allow the home front to become our exposed flank in the war on terror. This war must be won.
And it must be won decisively."

Kyle-Anne Shiver is a frequent contributor to American Thinker. She blogs at Common Sense Regained and welcomes your comments at kyleanneshiver@gmail.com.

Melanie Morgan has done all of this out of the goodness of her heart - with no compensation from Move America Forward. Instead, Melanie has donated thousands of dollars of her own personal money to MAF and a number of other pro-troop organizations.

On Saturday, May 10th, MAF is holding a tribute event for Melanie, called "A Salute to Melanie Morgan." It's part of a $100,000 fundraising drive for Move America Forward. All the proceeds raised from the fundraiser will fund MAF's summer pro-troop activities, as the organization will be stepping up its efforts at a critical time in the war effort, and a critical time in the nation's dialogue and debate about our troops and their missions.

MAF urges every red-blooded American to contribute to this "Salute to Melanie Morgan" and help MAF continue its efforts to support our troops, both at home and abroad. Thank you.