Help has finally arrived for military parents, who have traditionally been at a distinct disadvantage in child custody battles.  There is finally a federal law that now prevents state court judges from using military status of one parent as the sole factor in deciding child custody. 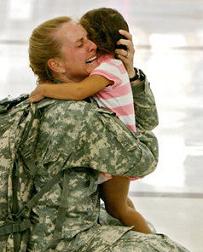 Civilian courts, at the urging of child custody lawyers, have historically discriminated against military parents in resolving child custody disputes.

The military lifestyle is "inherently unstable" for raising children, because the military parent is subject to deployment on short notice, and is therefore somehow deemed "unreliable" as a parent.  Seriously?

Why haven't family law judges in this country, most of whom work very hard to try to do the right thing for the kids, been educated about the requirement for every military single parent to have a Family Care Plan in place and approved by their command, so that if they are suddenly deployed, there is already a plan in place for who will take care of the children while they are gone?

This represents a failure on the part of the military establishment by not doing more to educate family law attorneys and judges about the requirement for single military parents to have a Family Care Plan in place, and how thorough it has to be.

Do we need to allow JAG officers to make appearances in family law courts to explain to the judge the military's requirement for Family Care Plans?  Or some other officer?

In the past, chances were good that in a military divorce, the non-military parent, whether mother or father, was more likely to be granted custody of the children in a child custody dispute. This tendency was more common in some states than others, and was part of the reason a federal law was needed to ensure equal protection under the law for military families regardless of which state they live in. 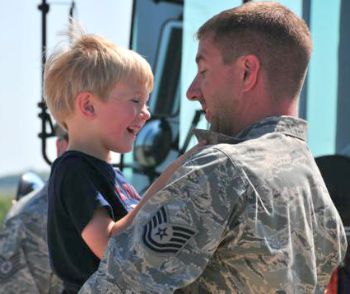 It is beyond me why any judge cannot inherently see how difficult it is already for both the parent and the kids to be separated for up to a year, especially if the children are very young, and the kids are worried they may never see mom or dad again.

Now, why would they want to add to that parent's anguish (not to mention, distraction in a war zone) and feed the children's fear of never seeing their parent again by permanently taking the children away from the parent they've been living with and granting permanent custody to the other parent?

Frankly, this anti-servicemember bias has existed for years, but I think it finally got enough attention to do something about it because people were outraged that perfectly good mothers were losing their children for the sole reason that they were in the military.

Obviously, such a bias is grossly unfair to the military member, who has chosen to serve to protect the future for their children, and all the children of America.  How much more selfless can a parent be?

How does that make them a bad parent?  How can judges be so blind?  Or are they just horn-swoggled by child custody lawyers over-reaching in their representation of the non-military parent?  (Unfortunately, sometimes custody battles are more about parents using the kids as weapons against each other than about what is best for the children. And to too many attorneys today, it's more about "winning" than about doing what is right for the kids.)

Military parents are somehow automatically bad parents?  You've GOT to be kidding me!  Show me kids anywhere that are more responsible, and more resilient than our fabulous military kids!  And with a stronger sense of the value and rewards of working toward something greater than self (unlike so many "civilian" kids today).

It's so sad that civilian judges don't get the opportunity to see that.  The ridiculous notion that the military lifestyle is an inherently unstable environment in which to raise children is a slap in the face to every military parent and to every military kid who's had to deal with a deployed parent.

That in itself is hard enough, without getting yanked back and forth between divorced parents thanks to a judge who is ignorantly biased against a military parent.

I've been contacted by several female service members looking for help who have been through that scenario, and even though they're back from deployment, the judge is not willing to give their kids back to them because they're subject to redeployment.

And one, who isn't even deployed, has lost her children simply because she's "subject to deployment."  Then her ex took the kids and moved a couple thousand miles away, so that she has to buy several plane tickets every time she wants to see her kids. The ex is not required to help finance the cost of the children visiting their mother.  And that's on top of the child support she is required to pay to her ex and his new wife. That judge has made it extremely difficult for this enlisted service member to see her children more than a couple of times a year because of the expense involved, and because she continues to pay child support even when the kids are with her.

If you want to read more such stories for a better sense of how widespread and egregious this problem is, just do an internet search for "military parents losing custody of children."  If you're anything like me, you'll be equal parts angry, incredulous and sad at all the similar stories you'll find.

Here is an excellent article written from the perspective of a military mom:

Mothers in the Military: Punishing Mothers Who Serve.

Thankfully, Congress finally recognized a need to take action to protect military parents, who shouldn't be punished by losing their kids because they serve.  The 2015 NDAA, signed into law in December 2014, provides that protection.

"SEC. 547.  PROTECTION OF CHILD CUSTODY ARRANGEMENTS FOR PARENTS WHO ARE MEMBERS OF THE ARMED FORCES.

(a) CHILD CUSTODY PROTECTION.—Title II of the Servicemembers Civil Relief Act (50 U.S.C. App. 521 et seq.) is amended by adding at the end the following new section:

‘‘(a) RESTRICTION ON TEMPORARY CUSTODY ORDER.

— If a court renders a temporary order for custodial responsibility for a child based solely on a deployment or anticipated deployment of a parent who is a service-member, then the court shall require that, upon the return of the servicemember from deployment, the custody order that was in effect immediately preceding the temporary order shall be reinstated, unless the court finds that such a reinstatement is not in the best interest of the child, except that any such finding shall be subject to subsection (b).

‘‘(b) LIMITATION ON CONSIDERATION OF MEMBER’S DEPLOYMENT IN DETERMINATION OF CHILD’S BEST INTEREST.

—If a motion or a petition is filed seeking a permanent order to modify the custody of the child of a servicemember, no court may consider the absence of the service-member by reason of deployment, or the possibility of deployment, as the sole factor in determining the best interest of the child.

‘‘(c) NO FEDERAL JURISDICTION OR RIGHT OF ACTION OR REMOVAL.

—Nothing in this section shall create a Federal right of action or otherwise give rise to Federal jurisdiction or create a right of removal.

—In any case where State law applicable to a child custody proceeding involving a temporary order as contemplated in this section provides a higher standard of protection to the rights of the parent who is a deploying servicemember than the rights provided under this section with respect to such temporary order, the appropriate court shall apply the higher State standard.

—In this section, the term ‘deployment’ means the movement or mobilization of a servicemember to a location for a period of longer than 60 days and not longer than 540 days pursuant to temporary or permanent official orders —

‘‘(1) that are designated as unaccompanied;

‘‘(2) for which dependent travel is not authorized; or

‘‘(3) that otherwise do not permit the movement of family members to that location.’

We've prepared a handy PDF file that you can print out and take to your attorney if you happen to be one of those service members affected by this new law:


If you are, have your attorney review the provisions of the new law to see if it might provide a basis for you to request a new hearing to challenge custody orders that gave permanent custody to your ex because of your military service.

If you've had a similar child custody experience because of your military status, we'd like to hear from you.

Scroll down to submit your comments below.

Do you have a story about how your military status affected your efforts to get custody of your children following a divorce?

We'd love to hear from you, and your story may help another struggling service member realize he or she is not alone, and is not the first one this happened to.

Of course, we'd love to hear about your happy endings, too!

Your submission grants us an exclusive, irrevocable and royalty-free license to publish your comments in any medium.

Click below to read how other military members have dealt with child custody issues following a divorce...

I am a mother of 2, about to be married to my childhood love, who is on active duty. If my fiance / spouse receives overseas orders, am I required to have …

Lost My Child Due to Deployment Not rated yet
I cried for months after losing my son in 2005 upon redeployment. Back home, it is still painful today. I knew my ex-husband would try something, and … 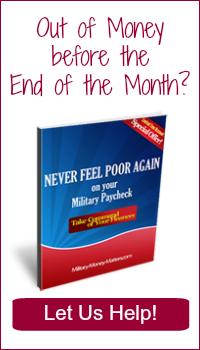