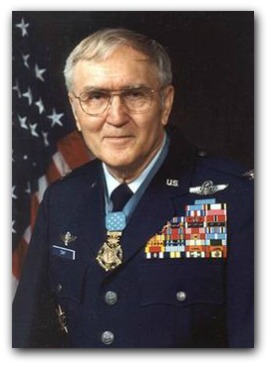 George Everett "Bud" Day was the only American POW to escape back into South Vietnam during the entire length of the war.  An Air Force Major and commander of an F-100 squadron, Day was shot down in August 1967, badly injured when he ejected, and captured immediately.

He was severely beaten and tortured for several days.  His captors thought there wasn't much chance of escape, because his injuries were so severe (his right arm broken in three places) and his left knee was sprained and badly swollen.  They left him loosely tied and guarded by teenage soldiers in a damp cave for three days.

But they underestimated Bud Day.

On the sixth night, he managed to escape, and for the next 12-15 days (he lost track of time), despite serious injuries and with no shoes, he made his way roughly 20 miles south, surviving on berries, rainwater, and uncooked frogs.

He made it across the DMZ, and into South Vietnam, and came within 2 miles of a Marine camp.  He decided it would be wiser to approach the camp during daylight hours so the guards could see that he was an American, so he bedded down in the jungle to wait for dawn.

In a cruel twist of fate, he was re-captured by a Viet Cong patrol early the next morning, and shot in the hand and thigh as he attempted to escape again.  He was refused medical treatment for his injuries, and his gunshot wounds became infected.  After 48 hours of unrelenting torture, the North Vietnamese believed they had broken him.  He had answered their questions.  They just didn't know it was with false information.

He was eventually moved to the infamous Hoa Lo prison, more widely known as the "Hanoi Hilton," where torture continued on a more-or-less daily basis.

In February of 1971, several of the prisoners were conducting a forbidden religious service when the angry guards burst in, rifles drawn and pointed at the prisoners.  Bud Day rose to his feet, and staring down the muzzles of those rifles, began to sing the Star Spangled Banner.  The man next to him also stood and joined him.  He was Navy Commander James B. Stockdale, the senior ranking American. One by one the others stood to join them, and their chorus was joined by prisoners in other parts of the prison compound who could hear them.

They were severely punished for their insolence, but Stockdale has said of the event, "Our minds were now free and we knew it."

In December of 1967, a young Navy Lt. Commander was put in the cell with Day, in a full body cast and unable to even feed himself.  John McCain was in such bad shape his captors thought he would die, and they wanted to be able to say he died while in American hands.  Day was still in bad shape himself, and their third cellmate, Air Force Major Norris Overly, nursed both men back to health.

Bud Day was freed in the general prisoner release of March 1973, after five and a half years in captivity.  After a year in physical rehab, and with 13 separate medical waivers, he was returned to operational flying status.

In 1976, Col. Day and Admiral Stockdale received the Medal of Honor from President Gerald Ford.

After being passed over for selection to Brigadier General, Col. Bud Day retired from the Air Force in 1977 and returned to the practice of law in Florida.

After he retired, Day published Return with Honor, an autobiographical account of his POW experience.

Day focused his law practice on veterans issues, and was instrumental in the creation of the TriCare for Life program, restoring military medical care for retirees.  Day won a class action suit in 1996 on behalf of military retirees against the federal government for breach of contract, after military retirees were stripped of their medical benefits by the Clinton administration and told to apply for Medicare.  After the case was overturned on appeal in 2002, Congress responded by creating the TriCare for Life program, restoring military medical benefits for retirees, as they were promised.

Bud Day dropped out of high school to join the Marine Corps in 1942.  After serving 30 months in the northern Pacific without seeing combat, he earned a Bachelor of Science degree on the GI Bill, and went on to law school at University of South Dakota, graduating in 1949.

He was one of that rare breed who served in World War II, Korea and Viet Nam.

Day was often cited as the most decorated American service member since General Douglas McArthur, with some 70 decorations, 50 of them for actions in combat.

Read the Medal of Honor Citation and additional details about Col. Day.


Col. Bud Day died at home in Florida on July 27, 2013, following a lengthy illness, surrounded by his family.  America has lost a hero and a true gentleman.

As Michele Malkin so aptly stated, "In a world filled with celebrity 'rock stars' and hero hype, Col. Bud Day was the real deal."

The Medal of Honor Citation and additional details about Col. Day.

American Heroes of Our Time

About the Medal of Honor

The Value of the American Flag to a POW 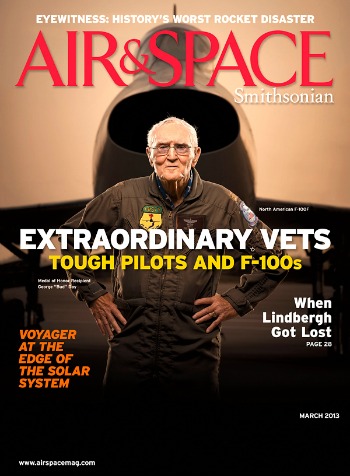