This is a picture of Andy's unit, posted at Obsidian Wings by hilzoy, and we hope it's OK with her that we have reprinted it here for you: 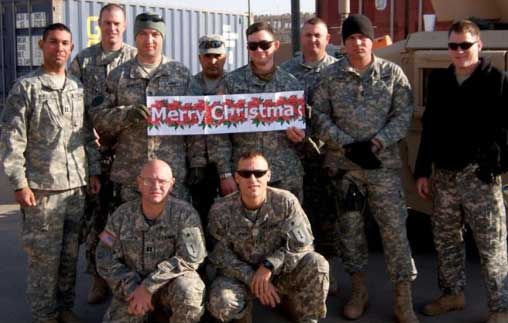 CPT Tom Casey (who was also killed) is in the back, second from the left; SFC Beaver< (who was injured) is beside him, holding the Merry Christmas sign; MAJ Andy Olmsted is fifth from the left, holding the other end of the sign and smiling.

There is a grass roots effort springing up at Obsidian Wings to "do something" to honor Andy's memory. His family has asked that any donations be directed to the following address, for the benefit of Captain Casey's children:

Another selfless act, this time by Major Olmsted's family. A wonderful way for them to show their gratitude for Captain Casey's efforts to help Andy when he was wounded.

One report said Captain Casey left behind four children, and another that said he had two young sons. We're not sure which is accurate, but either way, it is a tragedy that these children will grow up without their father.