A Father's Love at Christmas 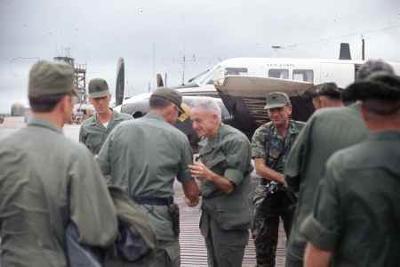 What do you do when you're a senior Navy Admiral directing the war effort against a city in which your own son is held as a prisoner of war?

Most Americans know that Senator and former Presidential candidate John McCain was a US Navy pilot who spent more than 5 years as a prisoner of war in the infamous Hanoi Hilton during the Vietnam war.

What many Americans do not know is the rich military heritage of Senator McCain's family. His father and grandfather both became famous four-star Admirals. McCain's grandfather was among the dignitaries present onboard the USS Missouri when the Japanese surrender was signed ending World War II.

It very likely was his father's status as an Admiral that saved young John McCain's life after his A-4 was shot down over the center of Hanoi.

McCain was on a bombing run over Hanoi, and his target was the power plant in the city center. Just as he dove in on the target, before he released his bombs, he heard the radar warning tone telling him a SAM (surface-to-air missile) was headed toward his aircraft. He released his bombs and pulled to create a steep climb to a safer altitude. But it was too late.

In his words, "In the instant before my plane reacted, a SAM blew my right wing off," and the aircraft plummeted. The seasoned aviator, then a lieutenant commander, had little choice but to eject.

As he ejected, he struck part of the aircraft, breaking his left arm, his right arm in three places, and his right knee, and was momentarily knocked unconscious by the force of the ejection. His chute had barely opened when he hit the shallow water of the lake.

Badly injured, he was dragged from the water by a crowd of angry Vietnamese who began to attack him. He was relieved to see an army truck arrive to take him away, for it appeared the crowd intended to kill him on the spot.

After being taken to the French-built Hoa Lo prison just a few blocks away, he languished, in and out of consciousness for days with no medical treatment. Apparently his captors had decided he was too badly injured to survive, so there was no point in providing treatment.(!)

On the fourth or fifth day, one of the camp officers rushed in and shouted excitedly, "Your father is a big admiral. Now we take you to the hospital." That fact likely saved his life.

That was in October of 1967. On July 4, 1968, Admiral McCain became Commander in Chief Pacific (CINCPAC), although McCain was unaware of his father's promotion for nearly a year, until a recently-captured pilot brought him the news.

That meant that Admiral McCain was responsible for directing US involvement in Vietnam, and for ordering bombing raids on the city where his son was held prisoner. He flew to Vietnam about once a month to meet with General Creighton Abrams for updates.

Surprisingly, McCain indicates, "My mother accompanied him on all his trips to Vietnam." On most trips, after his official meetings, he would go into the field to talk with the men who were fighting the war.

Our friend, retired Army LTC Brooks LaGree, who at that time was a Captain, was Admiral McCain's pilot on one of those trips, on Christmas Day, 1970. LaGree was a pilot flying with the Command Aircraft Company in the Army's U-21A aircraft.

He says, "We picked up Admiral McCain in Saigon (flight of two aircraft) and took him to Dong Ha. His official mission that day was to see the US soldiers stationed at Dong Ha (the northern most airstrip in South Viet Nam)."

Dong Ha was primarily a Marine base, and was the location of the northernmost aviation unit in Viet Nam. It was only a few miles from the DMZ that separated North and South Viet Nam.

At one point during the day, Captain LaGree noticed Admiral McCain standing, alone, at the north end of the runway. He appeared to be talking to himself.

It would be more than thirty years before he learned what the Admiral was doing at the end of the runway that day. John McCain explains, in his book Faith of My Fathers, "Every year he was CINCPAC, my father spent the Christmas holidays with troops near the DMZ."

Over the years the Senator has received dozens of reports that mentioned "my father's custom of withdrawing from his company at the end of the meal, walking north, and standing alone for a long time, looking toward the place where he had lost his son."

Every Christmas, Admiral McCain would get as close as he possibly could to Hanoi, and have a one-sided Christmas chat with his son, who was being held prisoner there.

We have provided the photo above to Senator McCain, along with the story, to add to his archive.

Being a professional warrior does not diminish a father's love at Christmas (or any other time), nor does directing the war effort decrease his concern about his son's well-being.

We know that all the fathers (and mothers) with sons and daughters at war this Christmas have concerns very similar to those of Admiral McCain. To those parents, and their sons and daughters, we'd like to wish a Merry Christmas, and offer our prayers for a safe return and a joyous reunion.

Thank you for the sacrifices you make on behalf of all of us and our great nation.